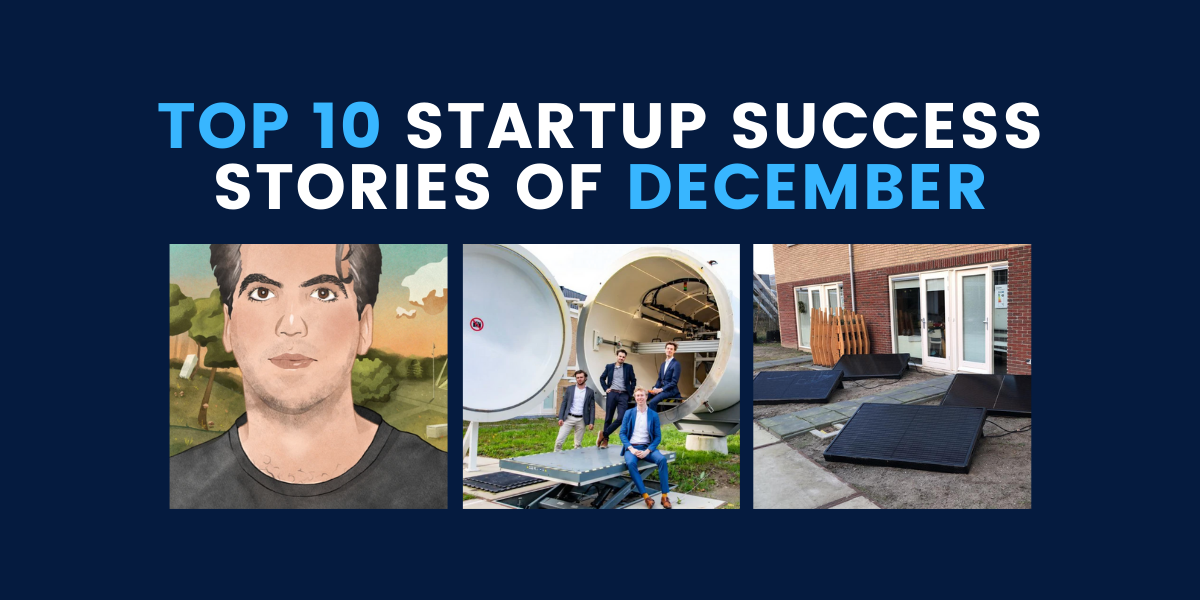 It is almost time to jump into the new year. It’s been a crazy ride but nonetheless a ride with a lot of ups for the startups along the way! So just before we pop the champagne bottle to celebrate that we made it to 2021, we would like to share the last startup successes of this year! Read all about it in the Top 10 of December, with this month not 10 but 11 success stories!

aQysta and Somnox got nominated for the KVK Innovation Top 100. On the 21st of January, we will get to know who will take over PHYSEE, the winner of last year’s edition.

You only have a few more days to apply for our next DeepTech program.

Circularise, Delft Circuits, Qblox, SenseGlove, Hardt Hyperloop, and Birds.ai are joining CES 2021, among the 80 most innovative Dutch startups and scaleups!

VICE Media has chosen Bob Hendrikx, founder of Loop, as one of the 20 Humans of the Year 2020! This is a list that honors scientists, engineers, and visionaries who are changing the world for the better.

Mapiq launched their brand new website. Paired with a fresh look and feel, and filled with new inspiration, the scale-up gets you ready for the next chapter of work

The CleanTech startup Supersola installed four ready-made solar panels on the roof of the DreamHûs. This is a test house in The Green Village on the TU Delft campus where innovations are introduced first hand! The test results from this realistic usage situation will be used in a discussion to eliminate ambiguities in the legislation and regulations of solar panels.

UbiOps announced that BAM Energy Systems started using their platform for data-driven analytics. “We want to use UbiOps to further develop propositions for optimising energy consumption for our clients in both the utility and residential market.”

Effect.AI has been recognized by the public and the Blockchain Netherlands (BCNL Foundation) being the best public solution made with blockchain technology in the Netherlands!

The startup that develops a wrist brace that suppresses tremor using the concept of noise-canceling won € 20.000, by making it to second place in the MedTech category of the EIT Health Catapult.

Because of all the votes from friends, family, followers, and fellow fighters against plastic waste in our waters, this startup took home the Audience Award at the finals of the WIS Award.

This month there were so many successes, so for once, we are adding an extra success! Just before the end of this month, Hardt Hyperloop announced the participation of the Dutch Government in their hyperloop development. Together with their partners Hardt Hyperloop have initiated the Hyperloop Development Program. This program is a public-private partnership to develop hyperloop as a high-speed, zero-emissions transport solution that could play a significant role in the climate transition. The Dutch Government grants a subsidy of € 4.5 million to these developments.

Don’t miss out on the successes anymore!