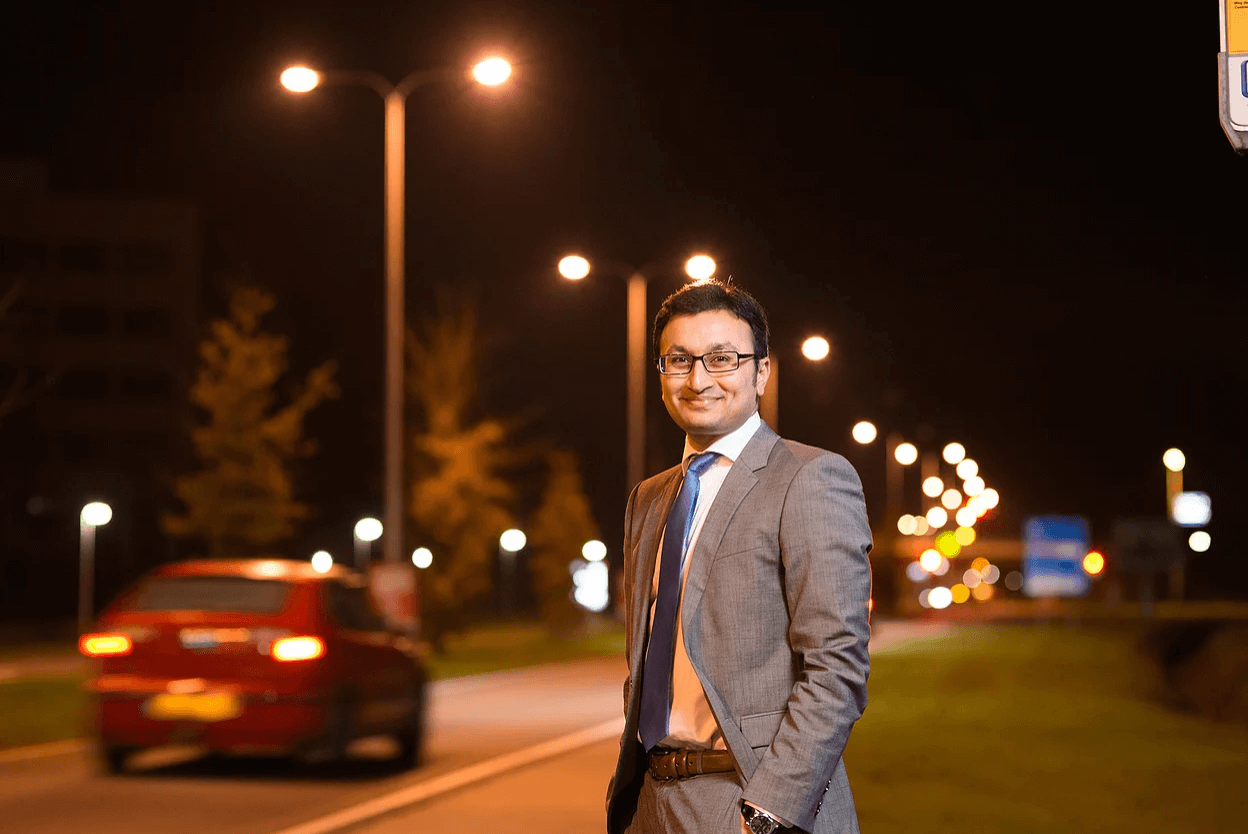 Written by kartikayesdelft on May 3, 2017. Posted in All Focus Areas, Artificial Intelligence, Deep Technologies.

For Chintan, not wasting energy is not just in his genes anymore. Today, it is also part of his entrepreneurial endeavor that goes by the name of Tvilight – a Netherlands based company that provides cities with intelligent lighting solutions in order to optimize energy use and cut down on light pollution. In short: Chintan is working towards the future of Smart Cities.

FROM A SIMPLE IDEA
As a former engineer for an oil and gas company Chintan used to spend hours and hours on flights across Europe. The idea for Tvilight was born exactly on one of his evening flights. A look out the window made him notice “this amazing number of lights […] From above you can see whether there are people in the streets, which made me wonder how come so many lights are burning even when no one’s around.” Some initial research presented him with a number of curious findings. “There are over 300 million street lights around the world resulting in street light infrastructure costs of over 10 billion euros. And that’s only the cost of energy, maintenance excluded.”

This is the point where I thought we should do something about this. I understand that, for safety purposes, we need light, but we only need it when there are people around. So then I had the idea: to develop sensors, which would regulate the light intensity based on human presence.” The result would be up to 80% of energy saved.

THROUGH CHALLENGES AND LESSONS LEARNED
His next move was to go to his alma mater, TU Delft, where a professor was quick to believe in the potential of his idea. The experience was eye-opening: “People are willing to help you if they see a passion in you. They are ready to open a door for you, if you ask for it – and in my case, that’s all I needed. The rest was up to me.”

Via the university, Chintan received first financing for his project as well as the help of eight students from different TU Delft faculties. They launched a pilot version of the connected lighting system on campus in 2011 and were able to prove that it saves up to 80% of energy.

The success of this initial project attracted media attention, leading Chintan to receive customer requests from several municipalities in the Netherlands. Three of them agreed to give him a year to develop a commercial version of the system. Discussions with investors, banks and subsidy providers, in turn, helped him secure much-needed financing that gave him the stability and confidence to found Tvilight in early 2012.

… AND THROUGH YES!DELFT
In the spirit of working with professionals willing to help each other, Tvilight applied for – and got accepted into – YES!Delft’s Incubation Program in 2013. “In this entrepreneurial environment, I have been able to find like-minded people to work and exchange ideas with, as well as to help and learn from. Entrepreneurs constantly face challenges with technology, with finding resources, with financing. [At YES!Delft], we’re all in the same boat – and although our paths are different, the destination is similar, because we all want to fulfill our dream.”

In addition to being in direct contact with fellow entrepreneurs, Chintan has also taken plenty away from YES!Delft’s close ties to the university. Access to the labs and the right kind of talent has been an invaluable contribution to the development of Tvilight.

TO A GROWING COMPANY
Today, Tvilight has a team of 35, and the company wants to expand globally in the years to come. So far, the team runs more than 100 projects in over 10 countries, including a large one on the Dutch island of Texel. What’s more, with a recent investment by lighting industry giant OSRAM, Tvilight is looking to scale exponentially.

The company already offers several Smart City and Internet of Things (IoT) applications like traffic heat maps, among others. For Chintan, the future of Tvilight is to continue on that path, yet on a much bigger, more prominent scale.