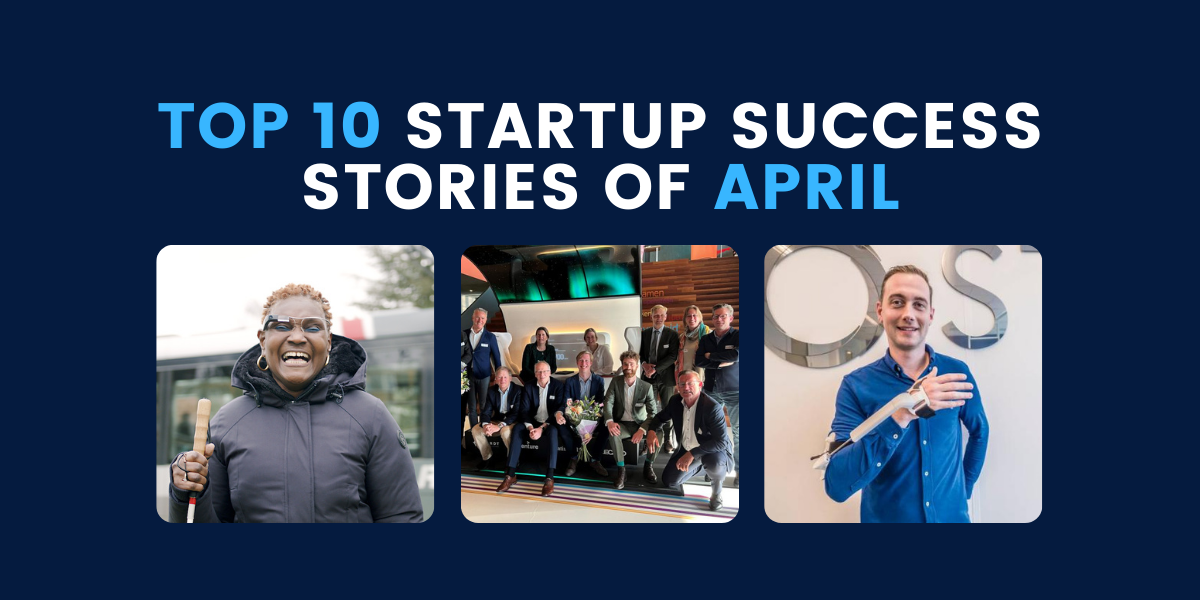 Written by Solvita Mazeikaite on April 29, 2022. Posted in All Focus Areas, News.

April in the Netherlands is a month when tulips start blooming and nature gets greener. This moment brings excitement to everyone, giving extra energy and motivating them to work harder in order to reach set goals. It’s no secret that some of our startups have received special attention this month, both locally and globally, for their hard work. Read more and find out how our startups have been recognised in the news, became finalists in global awards, and helped others in need in our top-10 startup success stories in this April edition.

Last month Envision went viral across the internet after Stevie Wonder tested their glasses.. “Stevie Wonder can ‘see’ again with the help of a Dutch invention!” a quote that appeared in many dutch news and newspapers. What an incredible success and great marketing initiative! Next to it, Envision CTO and Co-founder Karthik Kannan presented their startup to Dutch Prime Minister Mark Rutte and President of India Sri Ram Nath Kovind (Government of India Official) in The Hague, The Netherlands. The startup was shown on TV in the Dutch press. Here you can watch a video with Vanessa on the NPO Radio 2 morning show https://lnkd.in/eYmRbj4R. In addition they started a free pilot program that allows you to test out the technology in-person with your visually impaired employees to see if it’s the right fit.

Deep fake videos are used more and more these days and can have serious consequences. Recently deep fake video’s of Zelensky showed up on the internet, and DuckduckGoose recognised these as Deep fake as you can read here. Detecting deep fake is very important. DuckDuckGoose AI co-founder Mark Evenblij was a guest on a live broadcast of Het Klokhuis Meet Up about image manipulation. In it, Mark tells children in grades 7 and 8 how deepfakes are made and how you can recognise them. Creator of the ‘Bad News game’ Rivka Otten was also at the table. Finally, online parenting expert Jacqueline Kleijer talked about the dangers of online deception. Curious about the broadcast? Watch the video!

Tim Houter, a co-founder of Hard Hyperloop, presented the startup at the Mobility Congress in the Northern Netherlands. The region will be the heart of hyperloop development, with the European Hyperloop Center as an open test facility. Cooperation of entrepreneurs with the local, regional and national governments is key to making the future of mobility a reality.

FeedbackFruits became a finalist in 2 categories at the 2022 Edtech Awards. Their tool “Automated Feedback Coach” earned a nomination for Artificial Intelligence Solution, while “Group Member Evaluation” was nominated for e-Learning, Blended, Flipped Solution or Remote Solution. Click on the link below to learn more: https://bit.ly/3r1rzwg

Fusion Engineering, a Dutch flight control startup based in Delft, announced that it had raised €700k in its first investment round. Investors include the Dutch Graduate Entrepreneur Fund and a consortium of experienced angel investors. The investment will allow Fusion Engineering to bring their flight controller, the ‘brain’ inside every drone, to the commercial drone market. More information can be found in this LinkedIN post.

The Dutch newspaper Algemeen Dagblad spoke with Bob Hendrikx, CEO of Loop, about the nomination for the Earthshot Prize for their ‘Living Cocoon’. The Earthshot Prize is the most ambitious and prestigious – designed to incentivise change and help to repair our planet over the next 10 years. The prize celebrates new, collaborative action to meet the environmental challenges we face. Read more about this Here.

PATS Indoor Drones has been nominated for the Theme Award for robotisation and data-driven horticulture. Bram Tijmons, one of the three founders, sees a sophisticated balance between technology and biology as crucial for the future of horticulture. ‘We help growers control pests by combining smart software, high-quality mechanics and biological knowledge,’ says Bram. PATS is part of the Floriade in Almere this year. Here you can read more about the opening of this exhibition that is organised every 10 years.

STIL is featured in an interview by AD.nl about their aims and technology that helps people that struggle with tremors. STIL also achieved a big success. The device is currently being evaluated in the Reinier de Graaf ziekenhuis in Delft. Read more about their journey in this article. On May 19th, they will share their entrepreneurial journey during a Tech & Entrepreneurship event on the EUR, called YOUNITE. Tickets are still available on www.younite.me

Co-founder Olivier Coops of the startup Tiler went to the Ukrainian border to bring refugees to The Netherlands and help them with shelter. Olivier said that many people want to help somehow but don’t know how to do that. In the meantime, many people donated some money to support the foundation behind Olivier’s undertaking, Ukraine Run. This a breathtaking initiative started by two friends two weeks ago when the war started. You can read his story Here!

We interviewed Christiaan van Nispen and wrote a Startup story about their entrepreneurial journey. You can read the article here!

Aquablu introduced an industrial water purifier. Since the war in Ukraine began, there has been a lack of all resources, including access to food and water. The developed purifier was sent to the centre of Ukraine to provide the people of Ukraine with up to 30.000 litres of clean drinking water a day! Watch the video in this LinkedIn post.