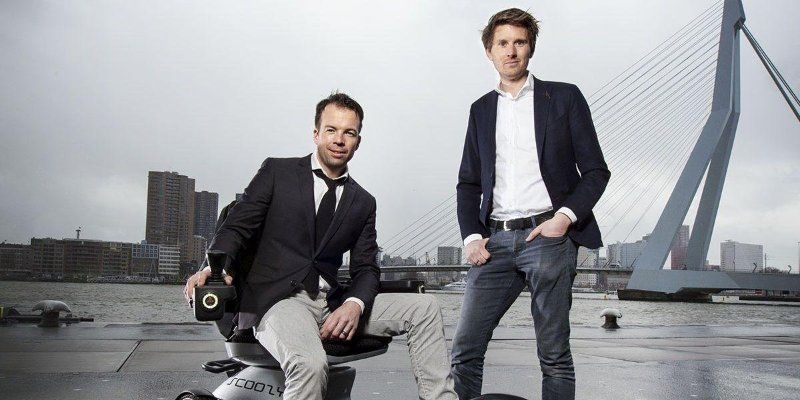 Written by Andreea on October 23, 2018. Posted in Deep Technologies, Uncategorized.

Imagine you have difficulty walking and you need to get from A to B in a fast, safe and convenient way. No problem. You can do that, and you can do it in style, too. Dutch startup Scoozy is developing a mobility scooter that is easy to use, has intuitive steering and braking and is good-looking, and caters to people – old and young alike – with a walking difficulty.

Job van de Kieft, founder of Scoozy, had known for years that one day he would start his own company in the field of electric driving. Yet it wasn’t until 2014 that he refined his focus: “There’s one group that’s been driving electrically for over 40 years, and those are people with difficulty walking,” he says. They’ve been doing so with mobility scooters.

Yet, mobility scooters nowadays are far from being flawless. On the one hand, people perceive mobility scooters as very stigmatizing because they are designed as an helping aid instead of a way of transport. On the other, they are often quite unsafe: “There were 28 deaths in the Netherlands last year, and 75% of the accidents are one-sided, caused by the people driving the scooters.”

Job and co-founder Jan Willem van Gent are on a mission to change that. With their team, they are working to develop a mobility scooter that serves as a way of transport, and not as a crutch. They see it as the “Tesla of mobility scooters”, and want to make it “so cool that anyone would drive one – even if they don’t have any difficulty walking.” To do so, the startup is focusing on a design that is nice and slick, as well as on creating a vehicle that is intelligent, connected and safe, with a low point of gravity and intuitive steering.

Thus far, the startup has a preproduction model of the product and the is now working on production of the first series, expected to be revealed in January 2019. With a busy schedule ahead of them, the team is happy to have YES!Delft guiding them along the way.

“[The Incubation Program] is about not making the same mistakes that other startups have made before you,” Job says. “It is so important not to have the simple things go wrong at the start of your company, and that is what’s great about YES!Delft: You know that, [with their help] the base of your startup will be fine.”

In addition, due to the competitive selection process, being part of the Incubation Program gives the startup a “quality stamp”, which Job is sure will be important in the months to come.

Today, Scoozy has a core team of 5 people. Together with strategic partners for development and production they are working hard towards their next set of milestones. With a demo already out there, the startup is about to launch a marketing campaign to highlight market introduction at early 2019.

Now that the first series is almost ready, the team’s focus is shifting to the scaling phase. The team has already received  1.3M funding and sold out the first series. They are now working towards a  second round of funding for growth. Securing a B2B partnership is another main priority, which will help the startup create a distribution channel.

There’s certainly a lot coming up for team Scoozy, with the Tesla of mobility scooters awaiting at the end of the road.

September 2017 – First round of investment secured

Apply to the Accelerator Program