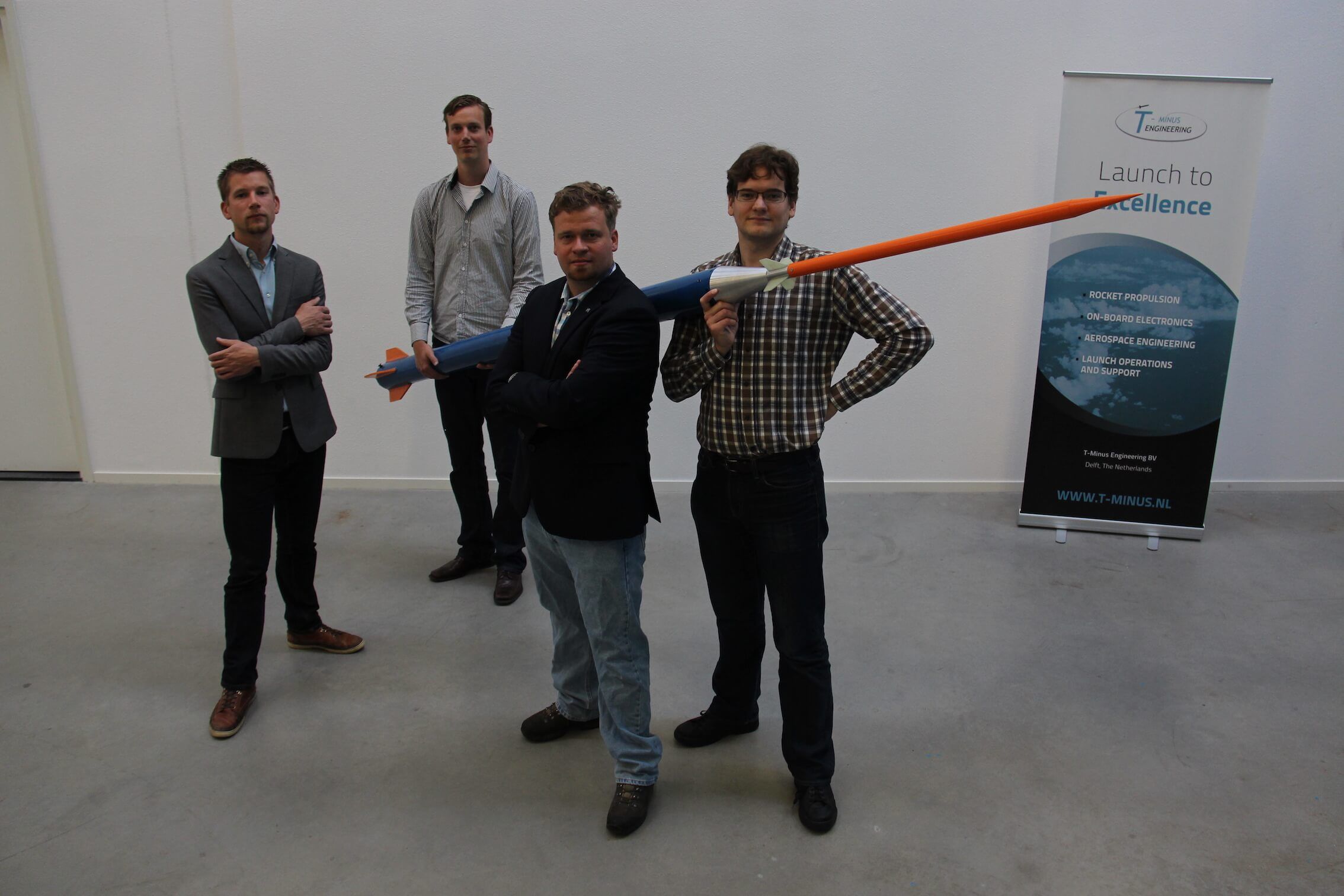 Written by Edoardo Repetti on June 12, 2018. Posted in Deep Technologies.

The sky is not the limit

Sending a rocket into space is no easy task – and understandably so. It becomes even more complicated, though, when that rocket is supposed to reach an area above the Earth’s surface that has, so far, been only poorly studied. The ‘ignorosphere’ – often jokingly called so by scientists – is at an altitude of about 120km and is particularly difficult to access, as it is too high for balloons and too low for orbital satellites. Delft-based startup T-minus, however, has a solution. With the DART, their sounding rocket now almost complete, they are soon to make this area more accessible to scientists and researchers.

For founders Mark Uitendaal, Roel Eerkens, Hein Olthof and Eric Smit, it all started in 2009 when they were members of the student rocketry society DARE at the TU Delft. In their time there, Mark came up with the idea to break the European altitude record for student-built rockets, and soon took the lead on the project. Needless to say, they did break the record.

Yet, that was only part of their initial success. “After breaking the record, we discovered that the sounding rocket — a rocket used for scientific research — we had designed was kind of state-of-the-art,” Roel remembers. In many respects, it was better than what was commercially available at the time, which led the team to the idea of starting their own company.

Ever since, the four engineers have been working long hours to develop their signature rocket, the T-minus DART, which customers can use for doing research in the upper layers of the atmosphere. It is specifically designed to reach the area of around 120km above the Earth, and help research institutes and organizations conduct their explorations. “We do full-service from design and manufacturing to launch, and also assist our customers with preparing their scientific payload,” Roel explains.

The T-minus team has been developing the DART for several years now, and in order to finance their own R&D, they have had to work on the side as engineering consultants on multiple projects. Those include the NASA Insight project, in collaboration with the German Aerospace Institute, for the development of a scientific mole that would sample the Marsian soil. The project recently officially launched (on May 5th 2018), and the rocket is currently making its way through space.

“YES!Delft has been a major player in the team’s growth over the years,” Roel says. “The connections, workshops and events at YES!Delft has taught us a lot about the business side of entrepreneurship. The best way to learn is by talking to fellow entrepreneurs, who can advise you on how to avoid the mistakes they have made in the past.”

With a strong support system behind them, the four co-founders have completed the DART. They’ve also already signed a contract with the European Space Agency to perform a number of demonstration flights. This means that the DART is currently commercially available. Moreover, the team is close to setting up a manufacturing plant in Deventer, in the near future. Lastly, the two big players DLR MORABA and Andoya Space Center have both expressed interest in placing the first order.

While the team has secured several grants to support their R&D, most of their capital has been coming from their consultancy projects with NASA, ESA and the TU Delft, among others. The
company is currently owned by the four co-founders, but they do not exclude the possibility of taking an investor onboard in the near future.

Team T-minus may be busy juggling various tasks, yet, they are well on their way to success. The NASA Insight rocket is expected to land on Mars in November, which means that T-minus will have hardware on Mars by the end of the year!

All there’s left to say is: May the countdown begin.