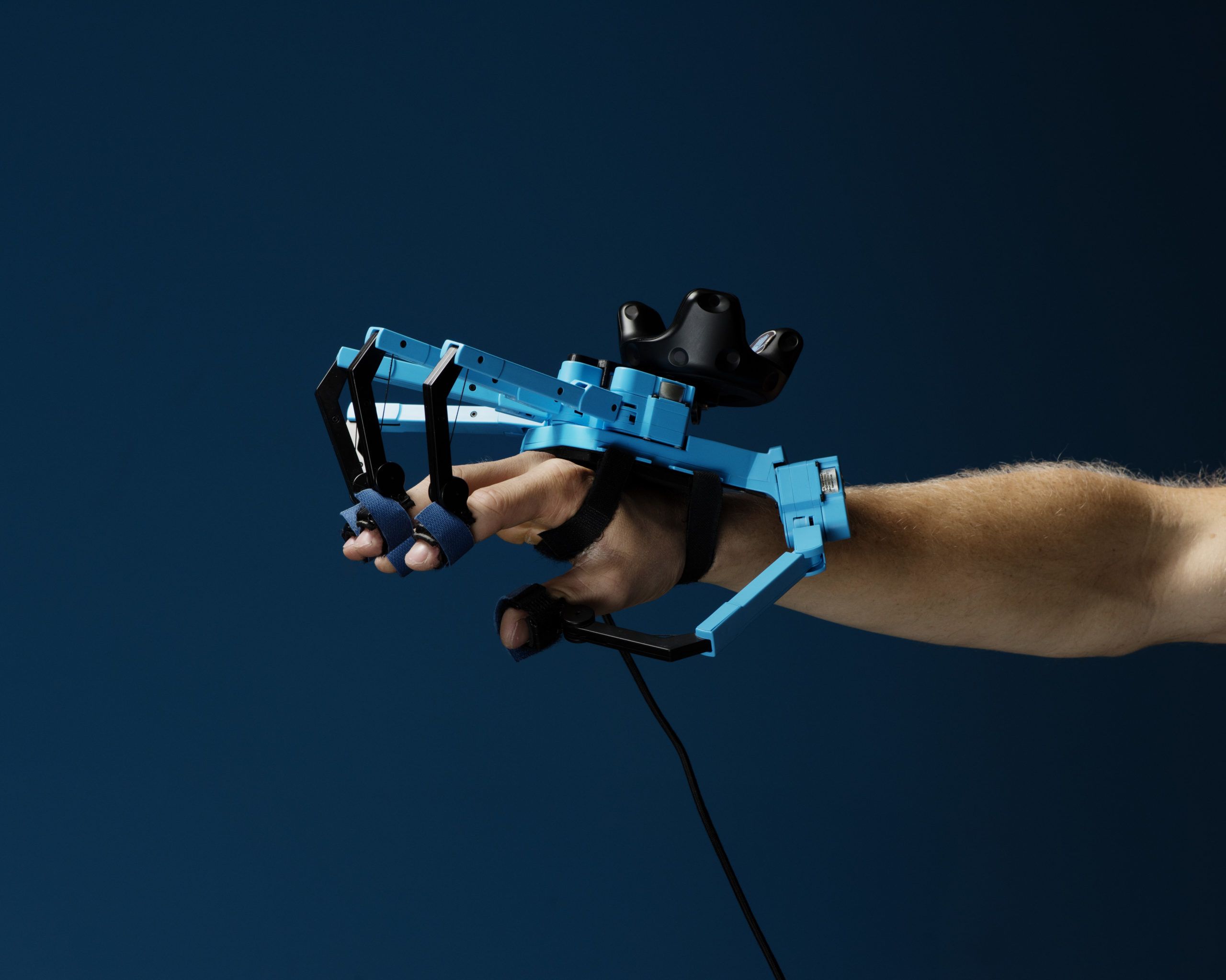 SenseGlove: The hand that lets you feel Virtual Reality

Technology is changing jobs faster than ever. Assembly training becomes an important aspect of many companies, but it is expensive and time consuming. However, there might be a solution that can solve those problems, virtual reality (VR).

VR combines the sense of hearing and seeing and gives the illusion of diving into every possible scenario. Yet, there is one missing aspect, not being able to feel what the eye sees. SenseGlove is solving that problem by bringing the sensing aspect into VR.

It all started with a graduation project. Johannes Luijten was towards the end of his Master’s in Industrial Design at the TU Delft when he took on the task to create a robot that would help people recover after a stroke.

“He created a big robot, a big exoskeleton that was capable of doing all the natural motions in the arm,” says Gijs den Butter, co-founder of SenseGlove. “From a technology point of view, it was a very interesting finding. The challenge was to translate the design into a feasible business.” This was the point when Gijs came onboard.

The technology that Johannes had developed was innovative, yet too expensive to fit into a sole business case. A more realistic solution was, thus, to take just one element of the whole robot – in this case the hand – and develop it further.

Originally, Johannes and Gijs made it their goal to develop a glove specifically for people with hand and wrist problems to help them guide through physical therapy.

The two co-founders realised that they have an interesting idea with business potential  but getting the certification and hitting the market would take a long time.

In 2015, they joined the YES!Delft Validation Lab to help them tackle that challenge and soon after, decided to broaden their scope. The team saw that there is a potential need in the VR market, but the change in business models meant that they had to completely redesign the glove.

“The great thing about YES!Delft is that you have a lot of common-minded people around you,” Gijs says. “Being part of such a community makes it possible to exchange experiences and knowledge with fellow entrepreneurs.”

Getting to know their market better, Johannes and Gijs made another decision and this time to shift their focus completely away from medical tech to becoming a VR company.

The change of business model was also partly due to the interest of car manufacturer Volkswagen (VW) shown in SenseGlove. In 2016, they built their first demonstrator and presented it at the CEBIT conference a year later. That was where VW saw their glove and was interested in using it for their assembling training.

They shipped their first development kits less than two years after the company was founded. Their haptic glove combines force feedback to feel restriction, as well as tactical feedback to feel the texture of an object. This combination enables the users to react similarly as in real life.

“Hand presence in VR is one of the most immersive things. At the moment I grasp this bottle in a virtual environment, I feel resistance with the resistance I feel the density and the size of an object. It feels like I’m actually holding it,” Gijs adds.

In the beginning of 2018, the team wanted to make their first batch of SenseGloves. That was when investor and now Operation Manager Niels Bogert joined the team. Currently, SenseGlove is a team of nine full-time employees, two of whom are the original co-founders.

For the future, they are working on a wireless version that is less bulky, smaller and easy to clean. The Exo Skeleton can already be purchased as a developer kit. Up until now, SenseGlove sold around 100 kits including clients like Google DeepMind, VW, Scania, Fraunhofer and Airbus.

Beginning of 2018 – Investment from Angel investor and COO