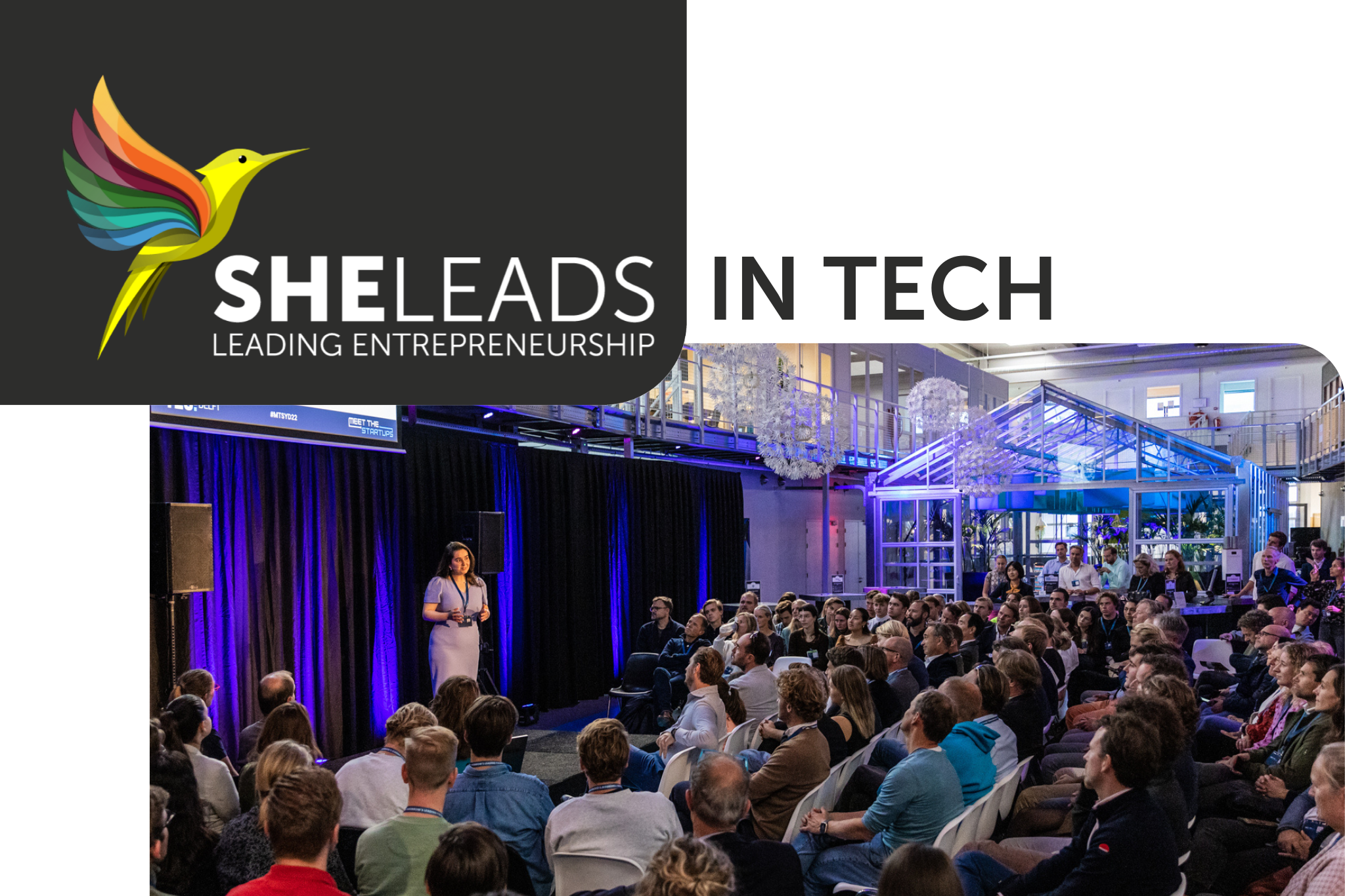 Written by Solvita Mazeikaite on November 4, 2022. Posted in All Focus Areas, News.

YES!Delft launches a new conference: SHE LEADS in TECH with a focus on female-led impact startups. A co-production with Erasmus Center for Entrepreneurship and Erasmus Enterprise.

The annual SHE LEADS event of the Erasmus Enterprise Community in Rotterdam gets a Delft-based partner event: With SHE LEADS in TECH, the leading tech incubator YES!Delft in collaboration with Erasmus Center for Entrepreneurship and Erasmus Enterprise, launch a new conference platform for (future) female founders and leaders in tech. SHE LEADS in TECH focus on impact-driven female founders with a focus on impact by technology: health tech, climate tech and deep tech.

With SHE LEADS in TECH YES!Delft, we want to showcase outstanding female tech leaders and female-led startups from YES!Delft and the wider ecosystem, as well as connect future (female) talent to tech startups through YES!Talents. YES!Talents is a new service by YES!Delft that helps to build winning startup teams and recruit the right talent.

“You cannot be what you cannot see. We have two goals with SHE LEADS in TECH: First, we want to inspire the next generation of female tech entrepreneurs by showcasing the startups of great female tech leaders. Secondly, we want to build a community around this outstanding female talent. From my experience, female founders are substantially more driven by creating a significant impact on health and climate through tech. We want to give these female tech trailblazers a stage with their great companies and technologies. The challenges ahead of us are gigantic – they range from the age of pandemics to the escalating climate crisis. These women add a much-needed, new perspective to the male-dominated tech sector and make sure that we have fantastic high-impact technologies, health tech, climate tech and deep tech.”

With SHE LEADS in TECH, we would like to create an inclusive community for (emerging) female tech leaders. And SHE LEADS in TECH is for anyone interested in impact-driven entrepreneurship in health tech, climate tech and deep tech and who is looking for outstanding talent in this space.

SHE LEADS in TECH is jointly organised by the Erasmus Enterprise community consisting of the Erasmus Centre for Entrepreneurship, YES!Delft, ERBS – Erasmus Research & Business Support, and in collaboration with partners from the innovation ecosystems from Erasmus University Rotterdam and TU Delft.

Visit the website: SHE LEADS in TECH for more information and a detailed program with speakers and startups participating. Written by Ioana Bruma on November 2, 2022. Posted in All Focus Areas, News.

Have you ever looked at the way nature sustains itself or at how everything is there for a reason? Well, if you haven’t, it’s never too late to dive into that. Take sharks as an example: they play a crucial role in the ecosystem. They remove both the weak and the sick from the oceans while maintaining a balance for species diversity. But what makes them so unique?

The sharkskin has tiny denticles which allow the sharks to swim faster and more quietly in the water since they decrease drag and turbulence. Imagine if planes, ships, race cars, or fast trains would have this feature on their surface to make them faster. This would automatically reduce fuel consumption, lowering CO2 emissions.

Ruben Geutjens (CTO of Qlayers) and Josefien Groot (CEO of Qlayers), who met back in 2017 through TU Delft, were simply inspired by nature and, in particular, the sharkskin. Therefore, they  came up with the idea to imitate it and develop a technology that can apply sharkskin microstructures on industrial surfaces to increase their functionality and make them more energy efficient.That’s when Qlayers was founded. 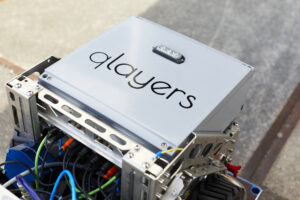 When Qlayers conducted market research and looked into big industries such as storage tanks, maritime and wind turbines, Ruben and Josefien realized that current coating applications are still done by hand. Therefore, they felt the need to disrupt the current methods and made a shift from developing sharkskin microstructures to first applying coatings automatically using high-precision robots.

Their first concept is the 10Q robot which was designed for the storage tanks industries, followed up by the 7CS robot (for the maritime industry) and the BL8 robot (for the wind turbines industry). The robots automate the coating processes for these certain assets. 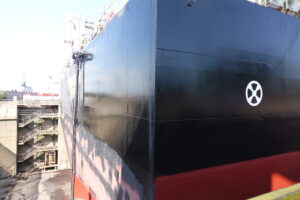 Qlayers is developing a unique coating technology that will increase not only the safety but also the accuracy and productivity of coating operations. The shielding system on the robots prevents overspray and the release of paint chemicals and fumes into the air, making the process more environmentally friendly.

Qlayers’ 10Q paint robot is in the commercial phase and has been deployed in several coating projects in tank terminals around the world while the 7cs and BL8 robots are in the development phase. 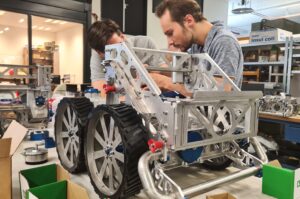 Stage of the company:

“We went in just 5 years from the start-up to the scale-up phase and that comes with a lot of changes, but our team is ready to conquer the global industrial coating application market!”- Shadi Parsa, the Head of Marketing at Qlayers

Due to its unique technology, Qlayers receives interest from potential clients all over the world. The company’s expansion into the global market started last year with its first international projects in the UK and the USA. The company also launched its APAC subsidiary in Singapore in June and plans to open an office in the US and the Middle East by the end of the year.

How has Qlayers been funded so far?

The co-founders began with some non-dilutive capital (personal savings; contributions from family and friends who believed in their vision), as well as cash from prizes obtained. Their paying customers also played an important role, and since the company is expanding globally, they are looking for more investment.

One of the milestones of the company was to sign an investment round with ECFG (a venture capital from Eindhoven) and AkzoNobel– which is both a partner and an investor. The relationship with AkzoNobel goes back to 2019 when Qlayers won AkzoNobel’s “Paint the Future” award.

Concerning that, YES!Delft has also played an important role since Qlayers got their first customer through their network. YES!Delft provided a lot of opportunities and support at a very early stage of funding, as well as access to valuable information and office space.

“The relationship with YES!Delft has always been amazing.”- Shadi Parsa, the Head of Marketing at Qlayers

Steps for the upcoming 6-12 months:

Since the company is growing and is focused on expansion, they aim to create an excellent service experience for customers and distributors around the world. In 2023, Qlayers will produce additional 10Q robots to meet demand in various regions. in addition, there will be more demos and trials for the 7cs robot 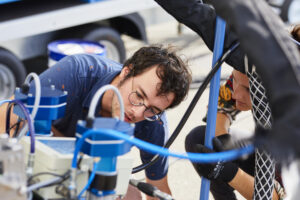 Your dream can become a reality too. As long as you want to make a change, don’t miss the opportunity to boost your start-up by joining the YES!Delft Validation Lab or Accelerator Program. However, if working for a start-up resonates more with your ambition, we got you! Check out the vacancies on our YES! Talents page!

Be part of the change, as change starts with you…